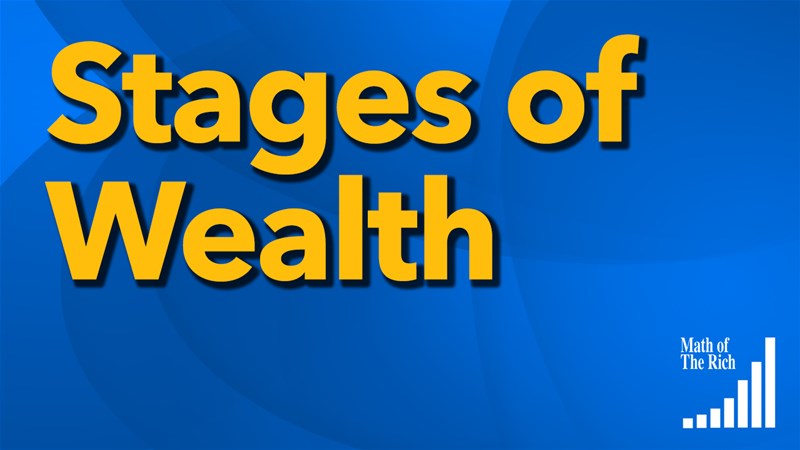 To talk about the stages of wealth, we need to define Net Worth, which is a common measure of financial wealth. The formula to calculate net worth is:

What are assets? An asset is anything of value that you own. Do you have a car? A house? Cash? Jewelry? Furniture? Clothing? Collectibles? If you can sell a thing to someone else and get paid, it is an asset.

The first part of the formula is calculated by adding up the value of all the significant assets you own. Significant is the important part. Technically, you can add the spare change in your couch cushions to your assets. However, most people are just going to add up the big stuff because your net worth will fluctuate, and the small things don’t make much of a difference.

The second part of the formula is calculated by adding up all the liabilities:

In this example, if you sold everything you owned, and paid back all the money you owed, you would have $76,200 left over to put in your pocket. That is your net worth.

What happens if your liabilities are bigger than your assets? Your net worth would be negative. If you sold everything, you could payback some of what you owed but you would still owe more money. That is the first stage of wealth, negative net worth:

The lifestyle at Stage 1 can be difficult. Every unexpected expense creates hardship and may lead to borrowing more money and sinking deeper into debt. Sometimes, people with huge incomes are also in Stage 1. They’ve borrowed a lot of money and haven’t repaid it yet.

If you don’t own anything and you don’t owe anything, congratulations! You’re already at stage 2. If you do own assets and you owe about as much as the value of your assets, congratulations, you’re at great starting point in your journey to build wealth. You can use your knowledge of savings rates to quickly move into Stage 3 with 80% of US Households (98 million).

The lifestyle at Stage 2 can be tricky. You may be living paycheck-to-paycheck and the slightest unplanned expense could send you back to Stage 1. Focus on savings rate and building an emergency fund of at least $1000 with the $20 Challenge.

When your net worth reaches $1 million or more, congratulations! You now have a larger net worth than 90% of the households in the US. Only about 10% (13 million) households have reached this stage. If you live a lower-cost lifestyle, this stage may be enough to retire early and live comfortably for decades. Using the 4% rule, your net worth could generate $40,000 per year. Buying a Ferrari isn’t advised but you will likely also receive social security. You’ll probably reach the average household income of $56,000 per year and live an average American life some extra fun trips and splurges.

About 6.5% of US Households (8 million) reach this level of wealth. Once you reach this level, savings rate and compound interest can help you move from $2 to $10 million but you will need new systems to reach the next stage. Salaried jobs are not going to pay enough to take you to Stage 6 in a human lifetime, even with a great savings rate. If you decide you want to jump to the next stage, you may need to own a business or use the leverage of other people’s money to move faster than income from salary. If you reach Stage 5, you may decide that’s enough. You have a large safety net, the ability to go on nice vacations, buy a new car every few years, and live in a very comfortable house. You may have a second home but those at the low end of Stage 5 still need to pay attention to spending to make sure they don’t overextend themselves.

Only 1% of US households (1 million) ever reach this stage of wealth. If you have $10 million or more, you are in an enviable position. You have enough resource to live off your net worth for the rest of your life without much thought about spending. Within this stage, there are significant variations in lifestyle. $10 million usually means a very nice house, a luxury (but not exotic) car and very comfortable vacations. But $50 to $100 million (only 0.07% of US households) brings the option to travel by private jet, multiple homes across the globe, multiple exotic cars, and a staff of experts to help manage your wealth.

Only 0.03% of US households, about 35,000, ever reach this stage. That includes 768 US billionaires. Almost anything you wish for is affordable. Instead of just traveling by private jet, you may own one or more. You can have multiple estates in the most desirable locations. You can trade money for time in almost every situation.

Warren Buffet, net worth $100 billion+, has frequently commented that the difference between the average American and himself is much smaller than people believe. He says that most people are going to eat the same food as him, wear clothing that is just about the same, drive cars that are about the same and live in similar houses with heating and air conditioning. Travel is the one area he calls out as significantly different because he can travel by private jet on-demand. This is important because the Stages of Wealth are not a game where the only way to win is to become a billionaire. They are a way to measure your current situation and can provide a roadmap if you decide you want to put in the effort to move to the next stage.

Most people won’t ever get to Stage 4. Those that get close to Stage 4 will have more retirement options but may also have to work a few more years to achieve their goals. The good news is that by being interested enough to learn about the stages, you’re setting yourself up for an achievable journey to Stage 4 or 5. An income, a focus on savings rate, and time are all you need to be better off than 90% of US Households.

Net Worth Savings Stages of Wealth